Keller Logistics Group is committed to serving the communities where we live and work. Whether it’s using our space or equipment to serve or by our employee involvement in local charities, Keller Logistics Group strives to be a community leader in our efforts to give back in any way we can by participating in national and local community service organizations.

At the national level, we are involved with many well-known organizations that are in-line with our values and mission at Keller Logistics Group. Wreaths Across America is a great organization which coordinates the transportation and delivery of holiday wreaths to over 1,200 cemeteries across the U.S and beyond. The American Heart Association brings out the competitive nature of our employees with our annual coin wars challenge to raise funds for the organization along with sporting our red attire to work on their National Wear Red Day which bring awareness to heart disease and stroke. Lastly, our warehouse in Defiance, Ohio is a collection site for Soles4Souls donations which collects gently used shoes for “wearing out poverty.”

To learn more about how Keller is involved with these national organizations, they are each highlighted below.

In 2015 Keller Trucking began participating in Wreaths Across America by donating resources (truck, fuel, and a driver) to be one of thousands of companies that help deliver the wreaths from Maine to the many cemeteries across the nation. The wreaths are then placed on the graves of veterans during the annual event held in mid-December.

Wreaths Across America began in 1992 when Morrill Worcester, owner of Worcester Wreath Company in Hartington, Maine had extra wreaths towards the end of the holiday season. Having special memories of his visits to Arlington with his father, he received special permission to lay the red bow wreaths at the graves of fallen soldiers in an older section of the cemetery. Morrill and volunteers did this privately until 2005 when the image of the cemetery with wreaths on their graves went viral, receiving national recognition and that was the beginning of the non-profit organization “Wreaths Across America” (WAA).

WAA’s mission is “Remember, Honor, Teach”, and is carried out each year with the coordination of a wreath-laying ceremony in December at Arlington as well as more than 1200 veterans’ cemeteries across the U.S. – including Riverside Cemetery in Defiance, Ohio, where we are headquartered.

If you would like to honor a fallen military veteran by sponsoring a memorial wreath, visit the Wreaths Across America website and they will be delivered to the you or the cemetery where the veteran is buried. 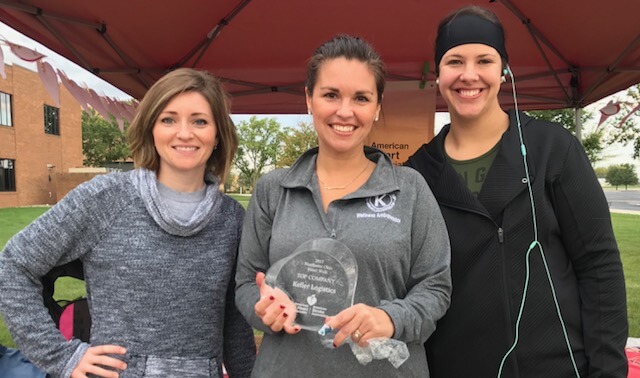 The American Heart Association is the nation’s oldest, largest voluntary organization devoted to fighting cardiovascular diseases and stroke. With a strong wellness culture at Keller Logistics Group, we’ve continuously supported the American Heart Association by participating in the walk/run held in the fall each year in Northwest Ohio, as well as their ‘Wear Red’ campaign.

Each year, we create inter-department fundraising via Coin Wars to compete to see who can raise the most money for this outstanding cause. Departments get very creative in their fundraising ideas from selling bottles of water, baked goods, and even hosting a breakfast bar!

In 2016, 2017, 2018, and 2019 Keller Logistics Group was awarded the largest fundraiser in Northwest Ohio at the annual American Heart Association walk/run. 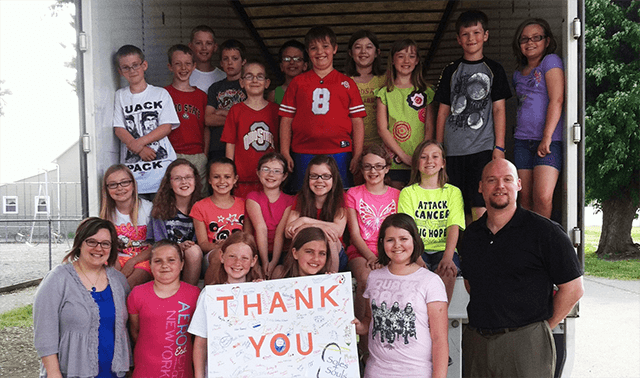 Keller Logistics Group is proud to serve as a donation processing center for Soles4Souls. Founded in 2006, Soles4Souls is a global not-for-profit institution dedicated to fighting the devastation and perpetuation of poverty through the distribution of shoes and clothing. Through the collection and sale of used (and new) clothing and shoes, Soles4Souls helps create self-sustaining jobs that generate desperately needed revenues throughout impoverished communities, both in the United States and worldwide.

Schedule time to drop off your Soles 4 Souls donation. 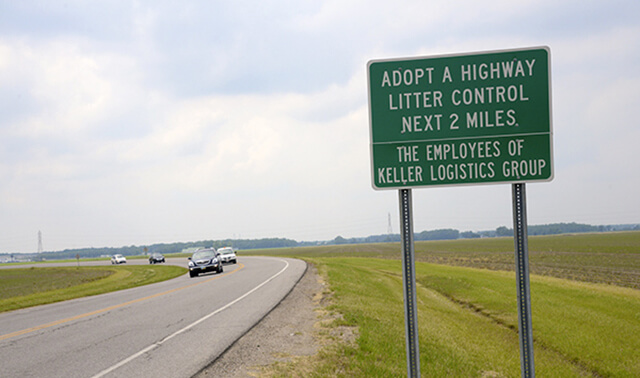 Two times a year, volunteers at Keller Logistics Group spend a morning or afternoon tending to the 2-mile stretch of road on Elliott Road from the intersection of State Route 66 to Domersville Road in Defiance, OH. Volunteers take pride in keeping the road on which our headquarters is located clean and litter-free.

Keller Logistics Group participates in a wide variety of local organizations through Defiance county, and the other areas where we have locations. For a quick run down of the organziations we’ve supported in the past, check out the list below.

We’re always open to new sponsorship opportunities, if you’d like us to consider your organization, please complete the sponsorship request form. We do require a W-9 form for all financial donations, so please be prepared to supply one when requested. 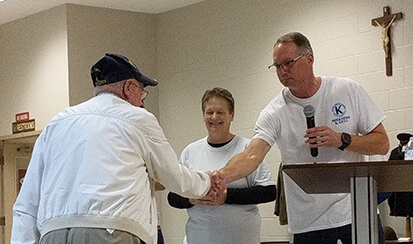 Operation K.A.V.I.C. (Keller | Assists | Veterans | In | Crisis) was created by Keller Logistics Group in 2015 as a way to prevent local veterans and their families from enduring a financial crisis by providing assistance in the gaps of their veteran benefits.

Every year we host a free appreciation event for veterans and their families where we ask local businesses and business partners to provide sponsorships. 100% of the funds raised through our fundraising efforts go to active duty, veterans, reservists, and national guard members that live in Defiance County. 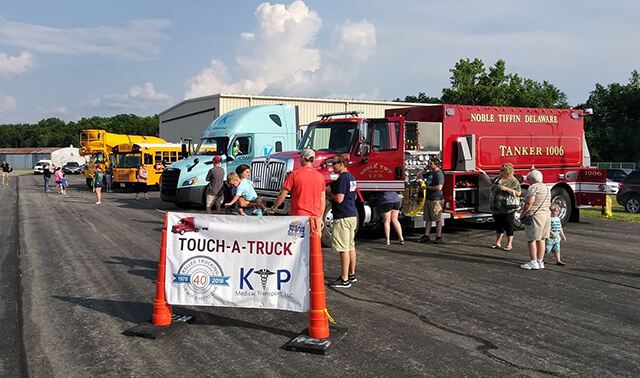 Touch a Truck at the Defiance Hot Air Balloon Festival

The Defiance County Balloon Festival is one of the largest fundraisers for Defiance County United Way. We’ve been a gondola sponsor for the balloons for quite a few years. Most recently, they added a Touch-a-Truck event where we’re very proud to show off one of our Keller Trucking tractors.

At the event, kids of all ages, even kids at heart, can climb up into the cab and see what the view is like from a semi. They can even honk the horn!

In addition to sponsoring a gondola, our employees often volunteer their time to help with the many activities that happen throughout the weekend. We even have one that works on the balloon crew helping them take off and land. 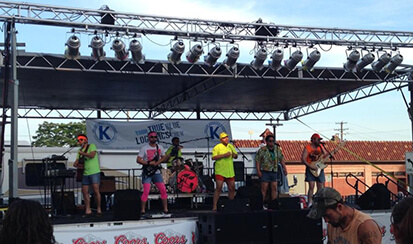 Our affiliate Keller Warehousing & Co-Packing is located in Napoleon, Ohio where we have participated in the past as stage sponsor for the Henry County Rib Fest. 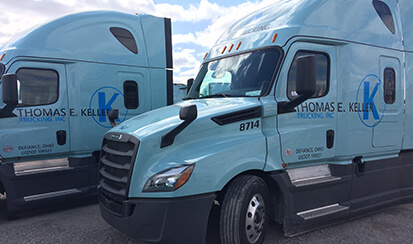 Since our roots are in trucking, we love sponsoring the truck drags at the Defiance County Fair. For the last 3 years its been a great way to kick off fair week, except for the year the event was rained delayed.

With our sponsorship we get to showcase one of our trucks on the infield of the track along with providing our employees a designated area to watch the truck drags up close.

We’re always interested in being actively involved in the communities in which we live and work. Check out our list to the right for more Defiance County sponsorships.

Every Friday, employees at Keller Logistics Group’s headquarters in Defiance, Ohio are allowed to break dress code and wear jeans for a $1 donation. At the end of the year, the funds raised are divided and distributed to local Charites. In the past, jeans day donations have been made to: House of Ruth, Fort Defiance Humane Society, One Step at a Time, and 4H Camp scholarships.

We sponsor our schools’ sports teams and extra-curricular activities such as band and choir.

Throughout the year we sponsor a variety of events that happen where we’re headquarted in Defiance, Ohio: